In my last post, I described how Canadians can avoid outrageous data roaming charges in the United States by establishing a domestic US data-only plan via the competitive iPad plan offerings from AT&T.  While Canadians can save an enormous amount of money by establishing one of these plans, they can also be used to garner more competitive data rates outside of Canada and the US.

Using the Canadian carrier Fido as my point of comparison (I presume all Canadian carriers will have similar offerings) here are their International Data Travel Pack offerings as of 25/06/11: 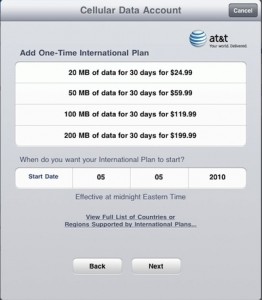 AT&T’s rates as of the same date, as based upon the data displayed in the “Add International Plan” menu from their data account manager integrated in the iPad’s iOS, start at USD24.99 for 20MB and top out at USD199.99 for 200MB.  Both Fido’s and AT&T’s packages are a one-time fee and the data is valid for 30 days and does not roll over.  While Fido does not cut off data usage once the initial package has been consumed, AT&T does, which is a good feature so that the user may have more control over their usage.

If we compare this on a pure cost-per-MB basis, AT&T rates range from $1 to $1.25 per MB, whereas Fido is $3 to $5 per MB.  While Fido’s International bundles garner a savings of around 85-90% off of their basic roaming rates, they’re still 300 to 500% higher than AT&T’s.  Clearly another cash grab since AT&T likely pays a similar wholesale cost for data in foreign countries as Canadian carriers do.  So, even if you primarily travel outside of Canada and the US, you’re still better off establishing a US-based data account.

One other nice aspect of AT&T’s process (and I presume it’s the same with every carrier who offers an iPad plan) is that additional data bundles can be added to the account on the fly, as long as you have an Internet connection (i.e. WiFi).  For Fido, you need to make a phone call and go through the usual call trees to ask them to add a block of data to your account.

If you are spending a long period of time in countries other than the US and Canada, it’s naturally better to obtain a domestic SIM card within that country.  I’m on my way to Spain next week and have pre-purchased a Vodafone MicroSIM with 1GB of data valid for 30 days, at a cost of about $140 including postage.  Even with AT&T’s far more competitive offering, as an International roamer, that amount of data would still cost $1,000 through them (but $30,000 through Fido at their a-la-carte rate!).  The other nice part about buying a domestic SIM, is that you can also get a local phone number to make less expensive local phone calls while you’re in that country.

Posted in Data Roaming | No Comments »